Eitan (Brian) Staples is a third-generation zoologist from Spokane, Washington who runs a traveling zoo. It is for all creatures — even the world’s cast-off animals.

Eitan, with his son David, says the travelling zoo began with his grandfather in the United Kingdom. “He was an animal trainer. He was one of the original horse whisperers with the Chipperfield Circus, probably in the 1920s. They came to America just after the Second World War.”

We are branching out and now providing an extended, up close and intimate experience with our new camp.

Staples Safari Zoo is all about peace, love and harmony.

“We have a collection of secondhand animals: a camel with an overbite, a tiger that’s been de-clawed, emus that were slated for an oil cannery. We take in a collection of animals that have special needs and we do educational programs to really focus on the fact that everything, whether it’s a special-needs creature or a regular chipmunk in your backyard, everything has a voice and everybody fits into the scheme of things.”

Nearly all of the animals in the show have been rescued from zoos and wildlife sanctuaries or from private collections whose owners were forced to give them up because of bad health or other reasons.

Staples’ show travels with eight employees to about 18 fairs four months of the year, crisscrossing the United States from coast to coast.

Amazingly, they all get along together. When we travel, they all load up together like Noah’s Ark.

Families of ring-tailed lemurs, primates from Madagascar, with their deep black eyes and long black-and-white tails, are a big hit.

The Staples Safari Zoo camp is an opportunity for an extended hands-on “Noah’s Ark” experience… but without having to spend 40 days and 40 nights in a flood. 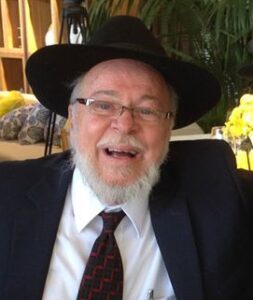 Known to all convivially as “Rabbi Sammy,” Rabbi Sam Kassin is everyone’s friend and one of the most recognized men in Israel in the field of Jewish education. His training, education and charismatic personality – a powerful combination – have helped him shape the image of the Shehebar Sephardic Center into a well-respected global educational center.

The son of Esther Sutton and Ezra Kassin, Rabbi Kassin descends from a long line of rabbis that dates back to 1600, with roots in Spain. One of 10 children, he was born in 1944 in New York but raised in Miami Beach, Florida.

Rabbi Kassin did not have the opportunity to study Torah until he was 16. But from the moment he opened the books of his ancestors in Ner Israel Yeshiva in Baltimore, Maryland, he was hooked. After four years in Baltimore, Sam followed

his heart to Israel where he spent four more years studying at the famous Porat Yoseph Yeshiva in Jerusalem. It was there that he developed a close relationship with the Gadol Hador, the Gaon, Rabbi Ovadia Yoseph, then Sephardic Chief Rabbi of Israel, who personally ordained Sam as a rabbi in 1971.

In 1972, Rabbi Kassin returned to the United States at the request of Rabbi Moshe Shamah, a prominent rabbi, to establish a high school for the children of the Syrian Jewish community in Brooklyn. Rabbi Kassin stayed on as principal of the Sephardic High School for five years. Following his tenure there he returned to Israel and from 1977-1980 directed the one-year program for American youth at Aish Hatorah Yeshiva in Jerusalem.

In 1980, Dr. Joe Nessim, president and founder of the Sephardic Educational Center, recruited Rabbi Kassin to be its first director. A year later together with Rabbi Eliyahu Shamoula, Rabbi Kassin opened SSC yeshiva in the Old City.

Now three decades old, the yeshiva has grown in number, reach and purpose into the present day Shehebar Sephardic Center with an unparalleled record of accomplishment. In 1998, the SSC won the Jerusalem Prize.

We are Staples Safari Zoo, and we build character and appreciation for all animals with adventure.